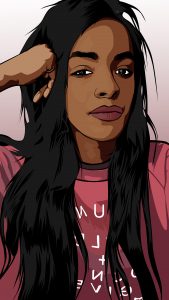 Sahar Ali is a poet, comedian, MC, and actor who has performed in some of Ireland and UAE’s biggest and best festivals  (Lingo Festival, the Dublin Literature Festival, Body & Soul, The Vodafone Comedy Festival, and the Abu Dhabi Book Festival). She wrote and performed in a sold-out one-woman show (Saharcasm) at the Dublin Fringe Festival. Sahar has been featured on the critically acclaimed drama AMC’s ‘Into the Badlands’. Since coming to Dubai in 2018, she co-founded Comedy Kix, Dubai’s best comedy production house. She has performed multiple times all over the country and topped off her journey with a Short & Sweet Theatre Award (Best Actress) and another sold-out one-woman show.
Sahar is a seasoned producer and performer with accolades that include TV and film appearances, on-stage performances, and backstage production. Sahar has over ten years of comedy, theatre, poetry, and production experience, working in front of a camera, writing shows, and putting together successful productions.

This is just a default widget. It'll disappear as soon as you add your own widgets on the Widgets admin page.